A funny thing happened on the way to my Writing for the Sciences class. The class, created to “woo” reluctant STEM students to write, didn’t fill. Ironically, I’d proven my theory: young future STEM students often balk at writing. However, the Academic Talent Development Program (ATDP) at UC Berkeley’s Graduate School of Education did offer me an Analytical Writing class in its stead. I assigned many of the same types of writing assignments as I would have in the Writing for the Sciences class.

One of my high school-aged students – I’ll call him Arthur – took copious, almost painfully diagrammed notes of every class lecture. Like his classmates, he had been awarded entry into ATDP on his academic merit and motivation. I looked forward to reading his first essay. The second week of class, we did a timed write on the nature of villainy. Arthur froze. Not one single word made it onto the paper sitting before him. We met after class.

“Dr. Scherman,” he explained, “it’s not like doing math. With writing, there’s no right answer. I’m just going in circles trying out all of the possible solutions to the equation.” 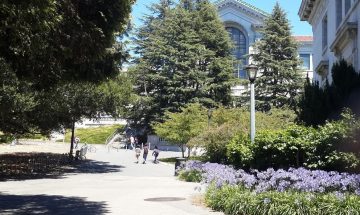 ATDP students on their way to Doe Library.

Of course, there is no solution – because writing is not an equation. And Arthur is not alone. I called for STEM-bound students from my Analytical Writing class to share with me their past experiences and future fears about writing. I’ll let them speak for themselves:

From a future neurobiologist: “Writing about math is fairly simple because it’s logical. However, you can approach ‘English’ writing in so many ways that it’s difficult to fully know where to begin.”

From a future engineer: “Writing is supposed to be argumentative in nature, but we have no theorems or postulates to prove our claims.”

From a future coder: “In school and in the workplace, I fear that I will not be able to produce quality work in the given deadline.”

The last comment reflects a common thread: students squirm under deadlines and grade expectations. Arthur’s writing paralysis is not uncommon; perfect is often the enemy of the good. Many of my students confessed that they enjoy writing outside of school and away from the prying eyes of those who would assign grades and time limits.

“I will have to write more and more,” predicted one student. “This will be a challenge for me, to try not to be overwhelmed and stressed … also, I will have to learn to write faster.”

I gave my students permission – okay, I encouraged them – to write “terrible” first drafts (which were always comment-only) and to tackle in-class writes without the pressure of a grade. They received full points for trying. They did try. Lo and behold, much of their best writing was done under deadline in response to questions – “equations” – that do not have one correct answer.

When I told them this, they looked at me as if I’d gone round the bend.

Perhaps, I suggested, the correct answer to a writing equation is to do the best you can do in the time that you are given. Perhaps time constraints can be the very things that free us to err. And once we are allowed to err, the discovery begins. 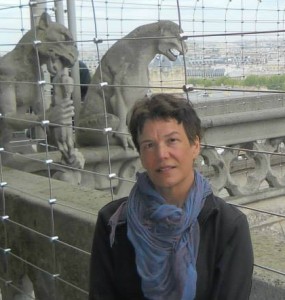 Elizabeth Leigh Scherman researches representations of divergent bodies in media as well as the rhetoric that accompanies such portrayals, whether in scientific literature, cinema, television, or other forms of popular culture.

She holds a Ph.D. in Communication from the University of Washington and is senior tenured faculty at Bates College in Tacoma, Washington. Her work has appeared in peer reviewed journals and edited collections, including Disability Studies Quarterly, The Galaxy is Rated G: Essays on Children’s Science Fiction Film and Television, edited by R.C. Neighbors and Sandy Rankin, The Worlds of Farscape, edited by Sherry Ginn, and an upcoming anthology, Tim Burton: Essays on the Films, edited by Johnson Cheu.

Scherman is developing original curriculum for teaching writing to students interested in STEM fields and will be teaching and initiating this curriculum at the University of California, Berkeley, Graduate School of Education, Academic Talent Development Program in the summer of 2016.